Warning: Offsite links are not safe spaces. Articles and comments in the links may contain ableist, sexist, and other -ist language and ideas of varying intensity. Opinions expressed in the articles may not reflect the opinions held by the compiler of the post and links are provided as topics of interest and exploration only. I attempt to provide extra warnings for material like extreme violence/rape; however, your triggers/issues may vary, so please read with care. 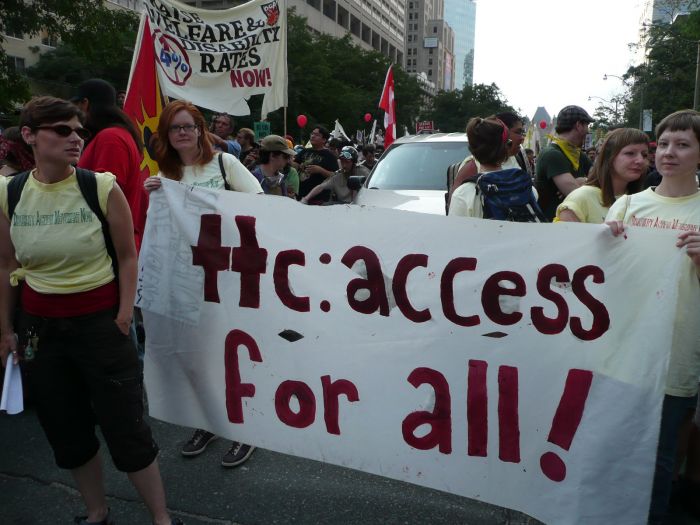 Photo by Hillary Lindsay for the Toronto Media Co-Op, used under a Creative Commons License.

Emomotimi Azorbo, a Deaf man, was arrested in Toronto for stepping off the sidewalk and being unable to hear the police’s demands that he get back on the sidewalk. The police would not allow his friend, who knew Sign, to community with him, and handcuffed Azorbo, which prevented him from communicating with anyone.

According to the Globe and Mail, the Canadian Hearing Society’s Gary Malkowski said the police failure to allow an interpreter who was not an officer to assist communication violates Canada’s Charter of Rights and Freedoms.

“It was a great deal of misunderstanding from both sides,” he said. “[Azorbo] bumped into police…and the police starting yelling at them to get back, he didn’t understand. His friends were trying to tell the police that he was deaf, trying to explain the communication barrier.”

“[The police] were about to let him leave, but then he got into their faces, and then was tackled,” added Thibault. “I think he was just intimidated.”

The Spoke: Deaf Demonstrator Released on Bail [in PDF, Text only transcription]

Mindszenthy is a member of Disability Action Movement Now (DAMN), a cross-disability coalition that includes disabled people and people affected by ableism.

Key Quote: “Handcuffing a deaf person is like putting duct tape over a hearing person’s mouth,” he said. “It’s a violation of their human rights.”

The above links focus specifically on disability-related news stories. For grass-roots and up-to-the-minute report on the G20 protests, the Toronto Police State, the 4 a.m. arrests of social justice activists, etc:

Illegal Soul is bfp’s tumblr, where she is posting updates from protestors she knows in Toronto.

Sabotabby is posting updates from Toronto.

October 4 2010 has been set as the date for the first conference in New Zealand on Access Tourism.

The conference will look at various aspects of Access Tourism, including some of the following:

The 3rd International Conference for Universal Design in 2010 will be held in Hamamatsu City, Shizuoka Prefecture, Japan, for 5 days from 30th of October – 3rd of November 2010.

United Kingdom: Against DWP Reforms for the genuinely sick and disabled

We believe that the constant vilification of sick and disabled claimants as work shy scroungers by the press has a great deal to do with increasing levels of harassment.

If you’re on Delicious, feel free to tag entries ‘disfem’ or ‘disfeminists,’ or ‘for:feminists’ to bring them to our attention! Link recommendations can also be emailed to recreading[@]disabledfeminists[.]com

One thought on “Recommended Reading, June 28”